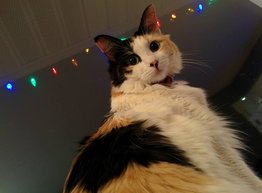 "Books"
We rescued Books from Culebra in April of 2015 and brought her to New Jersey.  Never having a cat we were worried how'd she'd take to her new home... But she seemingly loves it.  We were never "cat people" as the saying goes, but we spent a week+ living with Books in Culebra and we hit it off.  She's become a part of our family and is, seemingly, REALLY enjoying adapting to being a housecat... As much as I worried she wouldn't, she's way into it.  Friends of Culebra helped us get her home and it couldn't have been a better experience. - Billy Vegas 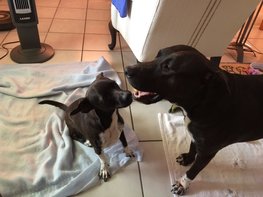 "Shadow"
Shadow was rescued with her brother, Noche, and another pup, Po (who now lives a beautiful life in Vermont) from Playa Larga - a very remote beach on Culebra, in the winter of 2013. Shadow and Noche had been fostered by Teresa Tallevast, a FOCA volunteer, for more than 2 years. Shadow was flown to Pittsburg last Saturday, 1/9/16, and this is what her foster family had to say:

Shadow is doing great! She has really taken to Rick and is truly his shadow. She went out with him this morning and played in the snow. We have about 2 inches on the ground. It was really cute. The first day when we arrived home, she saw the statue of a chihuahua on the front porch and she ducked down and put her tail between her legs. It scared her.

We slowly introduced her to our crew. She seems to be scared of the cats. She was afraid of Molly, our golden, but they are buddies now. She is still terrified of the chihuahuas. Tia is about 12 pounds, Dusty is about 10 pounds and Annie is about 2 1/2 pounds. Together them must really be scary. Lol. So we are just letting them do their thing but she really doesn't want them in the room with her. She is shy. She loves the family. And they love her as well. She is eating great.

We have been giving her about a cup in the am and then when we return from work. Amanda was there with her yesterday. She really wants to get on the couch with her but she has quickly learned that she can't do that here. If she did, I'd have to let everyone else and we wouldn't have room for us. :-) Instead we have a fluffy dog bed that is right next to the couch for her and she seems to like it. She has not had any accidents in the house. At first she didn't want to go outside. She was afraid of her surroundings. But now, she bolts out the door to go. The first day she was here I took her out in the back yard and her ears perked up really high. I looked into the field next to us and there was a big deer standing there eating. She didn't go after it but she sure did see it!

She is a perfect addition to our group. I think she has accepted Molly as a leader and since Molly is calm around the chis and the cats she is relaxing a bit more with them.

So...you may want to send us the adoption papers. I think we are going to need them. All our girls are older. The youngest is Molly and she is going to be 8 in May. Tia is almost 13 and is partially blind. Dusty is 12 and Annie is 10. So, we are approaching the senior years with all of them.

Thanks again for connecting us with Shadow. She is really special.

Shadow visited with the vet on Monday and the vet said that Shadow was the best behaved animal she ever worked with! 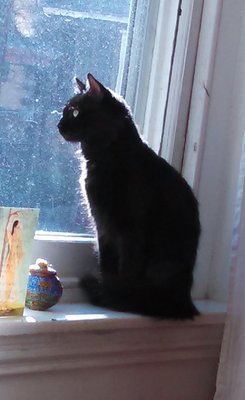 "Noche"
Noche (formerly known as Trouve), Culebra Beach Villas. And today (Jan. 16, 2016)... Jenny is delivering a Culebra Beach Villa cat to American Airlines cargo - Noche is headed to Philadelphia after a vacationer at the villas fell in love with him. Jenny prepared him for today's flight that began with a vet visit and sterilization, fostering, and travel to the main island today. 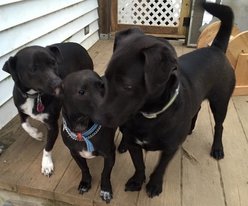 "Rita", "Ricci", and "Rocco"
Rita, Ricci, and Rocco (all from the same litter of 6) were fostered by Robbie of Deerfield, MA. All 3 dogs were adopted (she adopted Ricco) nearby and all 3 get together for play dates! The attached photo is a play date photo. 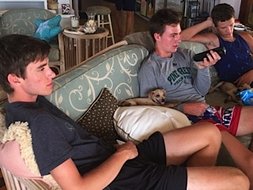 "Shake" and "Bake"
Shake and Bake (puppies rescued from National Wildlife Refuge), 2 small pups who fended for themselves while scouring for food from the recycling dumpsters at the National Wildlife Refuge. It took 6 very athletic adults to finally capture them at the end of 2015. Here's a note from yesterday from the family who helped rescue, foster and found homes for them: Hey there! I hope all is well enough in Culebra!

I thought I would give you a quick update on S & B. Bake was adopted by Billy’s family (Billy was one of the rescuers) and is adored. He is their first dog ever and it’s the most adorable fit. Their daughter Emily describes the markings on his shoulders as “angel wings.” Shake has the same markings and I’m sure that there are a number of other dogs on Culebra with them. My mom’s dog Tigo also had them. Shake was adopted by my mom. In fact, he will be arriving this afternoon on Culebra. He joins her little dog Una and Snowflake. It’s also a really nice fit. I am not sure when I will be on the island, but I just wanted to pass along that news! 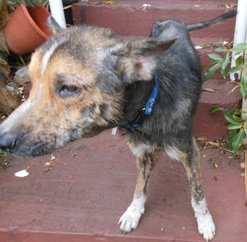 From being abandoned and left at Tamarindo Beach to the beautiful bucolic state of Oregon, Nariz always seemed to have a guardian angel by his side. So many kind hearts were behind Nariz's full recovery of serious mange and emaciation, without Sally and Darren Putney's fostering of Nariz, he may never have landed in Oregon with their good friend, Celena Christensen. Celena visited with Sally and Darren here in Culebra and was introduced to Nariz. Celena was looking for a buddy for her German Shepard mix rescue, and wallah! Nariz was the perfect fit. A happy ending at the end of 2015. 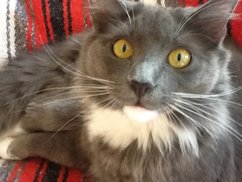 Dewey, quite a handsome cat, was rescued in 2015 by a tourist from Colorado who has been staying at the Culebra Beach Villas for vacation for over 15 years. Dewey's new family in Colorado is always amazed at his wonderful temperament.
©2017 Friends of Culebra Animals, Inc.
PO Box 527
Culebra, PR 00775
website donated by outer cape web and will keyworth